Action – The kusarigama is my favorite weapon in Ninja Gaiden 2 [360]. That game has the best combat ever. Seeing the sci-fi twist applied to this weapon in Astral Chain is deeply satisfying. I’m glad someone on the development team thought this distinctly Japanese weapon could have some various creative attachments at the end of the chain.

Combat is ultra slick with the Legion and chain. Like using a living version of The Legend of Zelda: Twilight Princess’s ball and chain weapon to quickly whoosh out a giant mass at enemies with a pressing of the trigger. Sending the Legion out/in plus the ability to send the player flying forward/backward is a cool dynamic. The close-up camera shot view when performing a hard slash is ultra impressive, especially so is the *thwack* sound effect accompanying its impact. You haven’t seen crazy action till you overhead slam the Legion at the end of your chain onto an enemy and then activate a combo where your own character themselves gets arced through the air and slammed overhead by the Legion as a followup attack. This is the dream weapon to wield in the future.

There are a lot of commands to memorize and applying all of them is a gradual process that unfolds the farther into the game you reach as it would be overwhelming under demanding conditions as you learn this new-type of combat system. You’re gonna be using every button on the Joy-Con with three being compartmentalized to switch between different ‘options’. Fights are more than just slashing away at enemies until they’re destroyed. Do I call in an airstrike, place a timed bomb on the field as a deterrent and ensnare a group of enemies with the Legion chain that tries to run past it, use the Legion as a shield for oncoming fire? — whatever you choose it’s gonna look good. Everything looks cool in this game. I really dig doing 360 degree spin moves that send blue shots in all directions.

Hitting an enemy and juggling them in the air in Devil May Cry on PS2 was satisfying because it was done in short intervals. Then it got perverted in sequels and other games to juggling enemies excessively in long intervals. Here the game goes back to DMC’s way of doing things alas without the dual pistols juggling mechanic. What’s better than one person hitting an enemy repeatedly that’s airborne? Two characters: you and your Legion raise off the ground and do slashing combinations on the enemy. Why it’s so satisfying is because the way to get your character to “jump” is achieved through special means of action as there is no assigned jump button. 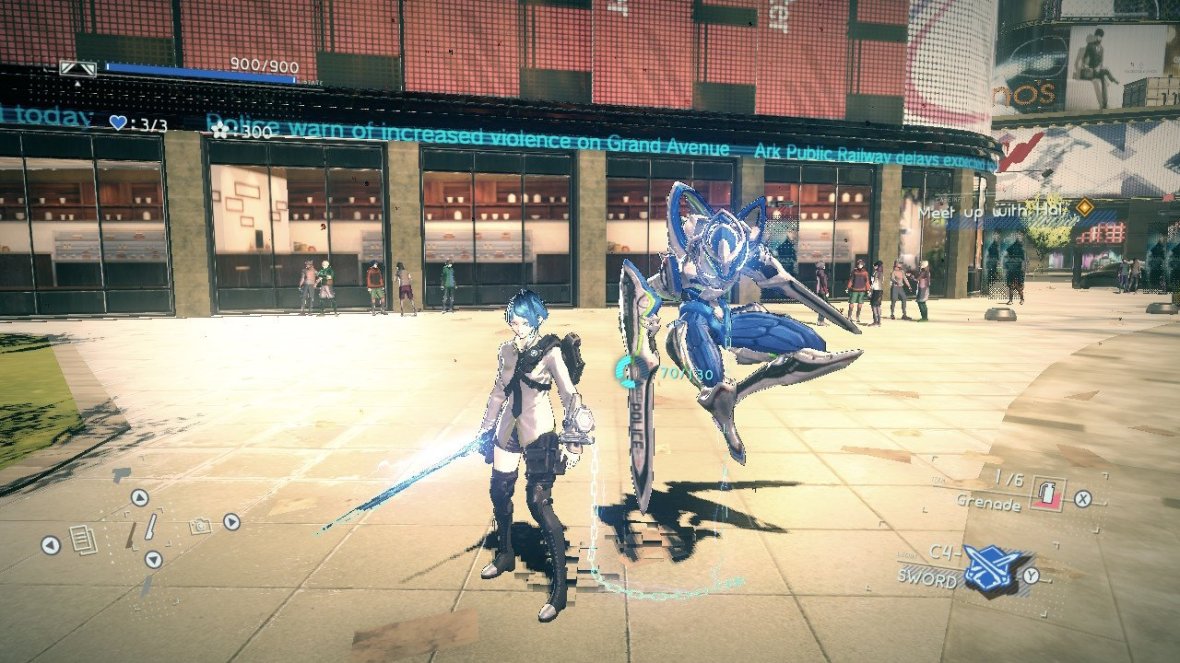 Keep track of player position and Legion position. Counter a charging enemy by throwing them backwards when they run into the outstretched chain is neat. Slide kicking under boss to back attack is nice; additionally, it works great as a distance maker. Wolf enemies are vicious. Fighting them was a new experience; to be forced to recall every button press and its corresponding action again finally triggering how to switch targets which is now done by pressing in the right analog stick. It’s fun to jump attack through groups of enemies; the hitting of one enemy in the middle of your jumping path and to hit another at the end of your jump.

Hidden combos such as the one where you slightly pause before firing another gunshot is impressive to stumble upon on your own. Keeping track of all the wheels is challenging under stress. Disappearing tiles in void levels is ridiculous when fighting enemies but reasonable in running sections. Fun to chuck things laying about in fighting ring. There have been a lot of hazards in boss fights; a lot are newly introduced adding an extra degree of rewarding vigilance. Having to watch your character, Legion, enemy, and potential stage hazard puts a lot of visual prioritization on the player.

Bosses are relentless and can move immediately within the player’s space no matter what. Dodging fireballs, throwing explosive crates, dodging a giant inflamed ball shaped enemy — awesome. Floor hazards in midboss fight are clever. Plant traps are clever. Game fights always feel different and engaging. Combat requires a cool head as game has a ton of switching from a gun to two sword types, from melee Legions to a projectile-based Legion, and from grenades to health capsules in an item wheel. Large amount of Boss HP causes fatigue on repeated fights, which makes sense since it is a boss. As such encounters of regular enemies noticeably drop in challenge right after, which is a point of interest in the necessity of spacing out intense fights with cooled down action.

While the ball and chain in The Legend of Zelda: Twilight Princess was a massive force used to shatter gigantic blocks of ice and smash enemies, it was held back by its slow speed in hitting enemies outside of its pertinent dungeon. Not so here with this weapon. 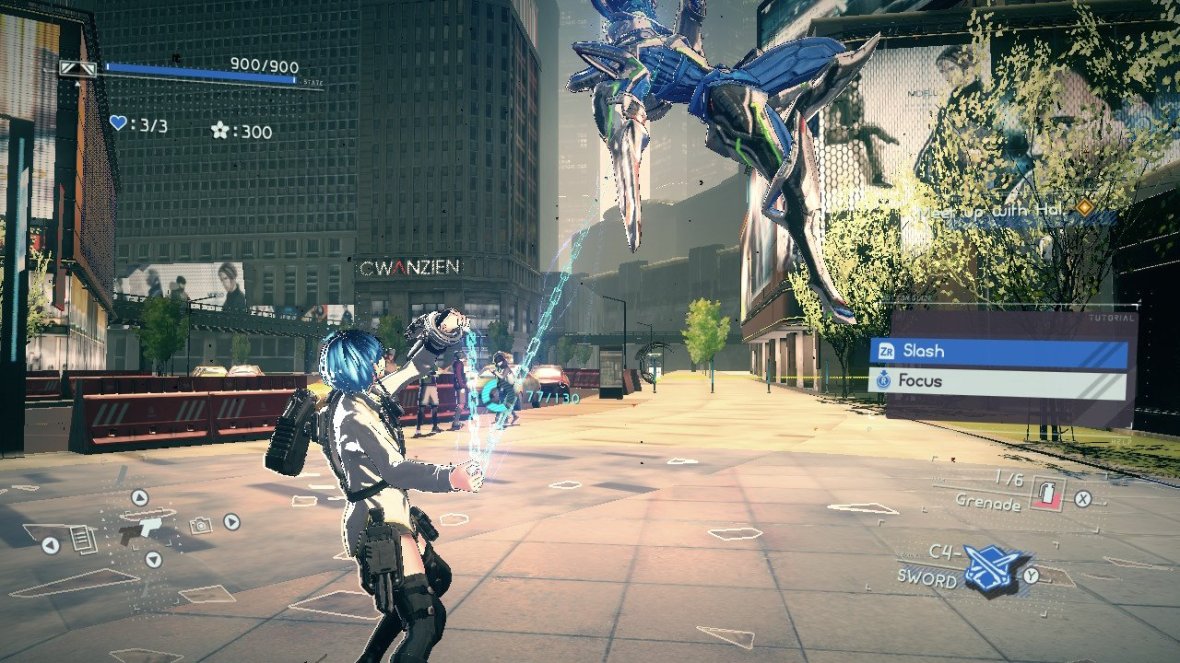 Divergence/Structure/Downtime – PlatinumGames started throwing a lot of applications at this weapon to a Zelda-like degree: the Legion attachment can be thrown out and then with a yank of the chain pulled back in to hit enemies, the Legion can be positioned in places around the player’s character to act as a potential shield from attacks, it can yank the player across gaps, it can allows the player to fling themselves around obstructions, it can hogtie enemies, it can be used to overhear NPC conversations, etc.

While there is plenty of action content in the main game and side missions, there are other scenario types. I like the portal jumping into the Astral Plane sequences where you platform, explore, and occasionally fight before reaching a boss. The grapple recovery back onto the stage after falling off is a great addition as dying in God of War [PS2] by falling off a plank as the first death was extremely off-putting. Moving around is new and pleasant. Say goodbye to dull double jump platforming.

Additionally, I like navigating in the HQ (say no to quick travel); I enjoyed seeing how this unique Legion was used for the stealth sequences, which are fun but somewhat disappointing in how inconsequential successful no detection is revealed to be. Stealth is so light in action it makes it seem like you reverted back to level 1, which is sort-of nice to pick back up on the game after not playing it for awhile. Pass/Fail option is interesting. The lassoing is really cool to see, much neater than Spider-Man since it requires a certain degree of positioning, which means you need to concern yourself with space of guard and your location.

Now the dislike: the investigation scenarios and difficulty drops. The investigations are underwhelming but thankfully relatively short, which is true for just about every minor grievance I have with the game. The exploratory direction of this game is fascinating in contrast to the first game made by PlatinumGames: MadWorld.

The game feels like every time I finish a boss fight the stage enemies go back to being relatively non-threatening. Enemy difficulty drops significantly on beginning of missions. The structure becomes apparent of “I just beat a boss, so now the game isn’t going to throw anything tough at me next.” This is extremely apparent when you finish a boss fight to then encounter Jenna who you know wouldn’t make sense to fight. 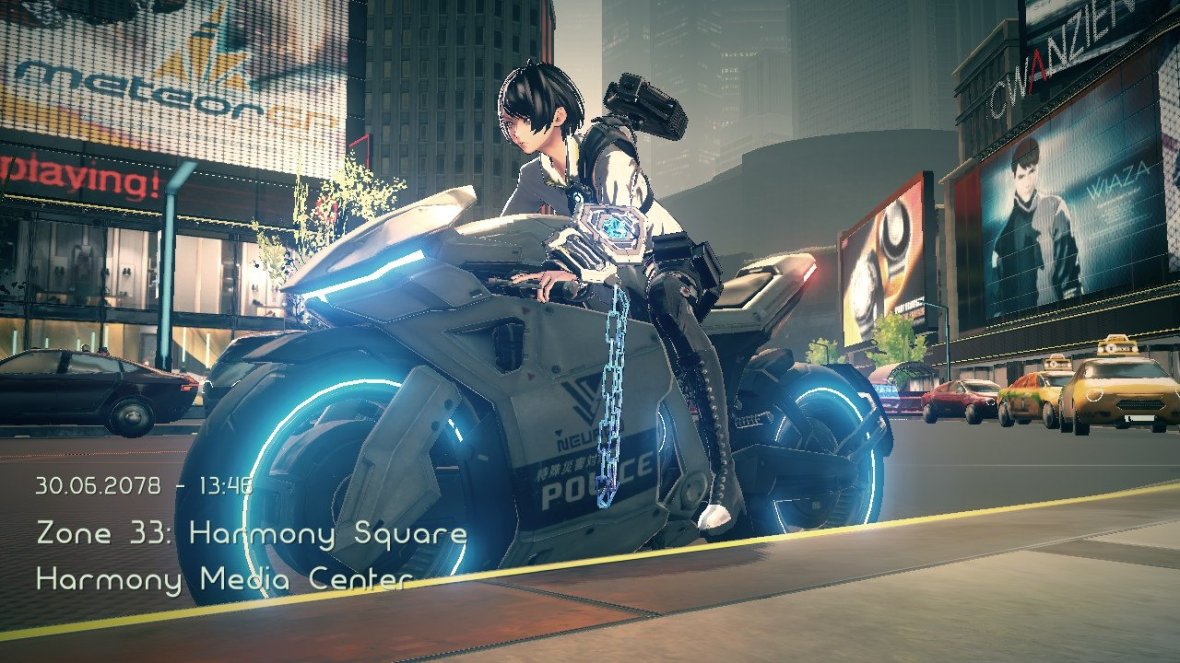 Beyond/Purpose/Discovery – I would like to talk about optimal action aka ‘The Fun Tier Meta’,  a ranking of fun user-made modes showing different ways of playing this game. Astral Chain is a game that you can play and have a vastly different experience with it if you decide to use items a lot, particularly the health items. The most enjoyable way I play this game is to not use health recovery items including the battery (revival item) in combat scenarios, which makes health regain finishers that much more impactful. The game is way too easy on the default difficulty if you use those items. When you don’t use those items you will play better because you cannot brute force your way through the game. It’s certainly possible to make this a lesser experience rushing through the game to beat it; plus, it’s a new-type of action that’s sure to get learning-curve complaints. How do you make your fun?

Astral Chain gets 2019’s “Action Game of the Year” from me. After seeing that my character can barrel roll (x3!) in the air after firing a high-powered blaster shot, it was an easy conclusion. That’s the coolest thing I’ve seen in the decade of action games.

Often at times I think this is the best action game ever made.

Dying in God of War [PS2] by falling off a plank as the first death was extremely off-putting.

Animal Crossing and No More Heroes had cooler looking clothes to find, although the designs would be out-of-place here.