ON THE BLUE COINS:

Super Mario 64 had blue coins be the equivalent of 5 yellow coins. In this game blue coins are their own separate collectable. Collect 10 and trade them for a Shine. There are 240 Blue Coins total in the game (30 in each of the seven courses, 20 in Delfino Plaza and Delfino Airstrip, and 10 in Corona Mountain).

The coins look so shiny. The use of yellow coins to contrast with an interspersed blue coin is very good looking. I haven’t seen coins this resplendent in a game before. Hearing that steel pan make that plunking sfx when you touch one is immensely satisfying. The downfall of blue coin collection is that the stages become plain by Mario essentially acting as the corrosive element to the environment (removing the world of its “stars”). The blue coins give you more places in the stage to reach and more reason to explore (the latter shows off how advanced the camera system is — to do this with a mediocre camera would be obnoxious) but done in a way that maintains a sensible look within a 3D world, so not the gobble-em-up pellets in long lines of Pac-Man World 2 that 2D-mensionilizes movement or the “insert item on column top. apply all” job of Jak and Daxter that degrades vertical expenditure into monotonous hopping.

All blue coins are not equal though. There is plenty variation to how blue coins are presented. If all the blue coins were all, boringly, placed in plain view the game would lose a lot of its charm. With how they are, collecting is not chore-like or fetchquesty. Blue coins are an expansion on the change of having multiple selectable action sequences (missions) in Super Mario 64: choosing mini sequences within a sequence.

The best blue coins, the ones where you have to race to get a blue coin before it disappears, are much more pleasurable to get than the exploration ones because they up the tempo of the game giving Mario something to exhaust his acrobatic expertise on. Second to that are the rare blue birds that falls to a blue coin when sprayed. Having an aerial moving target places importance on scouting, moving into a more advantageous vertical position to strike, and accurately aiming for a duration of time. My third favorite blue coins were the ones that required navigating over lava in a gondola.

A major design frustration is with blue coins that’s availability is limited to certain episodes and not others. These ultimately require you to scurry through a stage of every mission looking around for minor changes that may or may not be apparent. That means a lot of re-scouring the stage not sure whether the trail is hot or cold, which eventually feels like a simulation of that time you misplaced one particular item in your home except your house takes place in 7 dimensions.

And that brings up the new issue where secret findings are not an extra but apart of a grand total. With a more revealing collector’s guide (i.e. display of blue coins collected from the total per episode) the complaints would lessen but that would clutter up the guide turning it into an oppressive statistics chart. If the blue coins had a hint system the complaints would vanish but that would lessen the enjoyment of finding them on your own and would require an obnoxious amount of development time to include. Miyamoto & company decided to go back to Zelda NES days of discovery where players talk amongst themselves on secrets they’ve discovered. It would be ideal to have a friend hint you while they are over at your house when going on these blue coin hunts. What is the result of looking for <5% of the devious blue coins by yourself?

The Path of Frustration – Now when I beat the game a few days after launch I did not continue playing it till I got all 120 shines. Getting 100% in a game is usually exhausting, and I will usually give up up long before then (see: Donkey Kong 64, Mischief Makers, Yoshi’s Story,–geez! probably the whole 3D action adventure library for N64). What is deceptive with blue coins is that collecting them all seems like an inevitable conclusion when so much of the game went by with me making consistent and rapid progress, then I hit the wall of finding the last 20 or so of these coins. I felt quite content with my experience devouring the bulk of the game in the short time I did. Looking back this was a healthy approach to this game. (It would have been quite an ugly experience if I had confined myself to autistically 100%’ing a stage before moving on to the next one.) I did, you know, get curious about what the final reward was maybe a month or so later, looked it up, and realized I made the right decision.

Why would I want to do these OCD tasks without outside help? When Super Mario 64 came out I was young and got a guidebook to 100% the game. There was no shame in it. And I suppose there really isn’t any shame in reading a guidebook for Super Mario Sunshine either. If I wanted to 100% the game I still would end up satisfied with my experience because I’d have used the guidebook, after the challenge to see how many I could get before needing help. No one sane got 100% in this game without outside help.

In conclusion, the execution of blue coins was probably around 98% good and 2% bad. The full blue coin experience will end on a sour note finding the latter without supplementing in guidebook use. My recommendation, which is what I am still doing, is to slowly chip away at finding the last coins over a long period of time. Delayed gratification. Isle Delfino is a place to relax and take in the sights — blue coins give the world more discoverable depth that prolongs the experience, but refreshment has to come from a source that defies depletion. 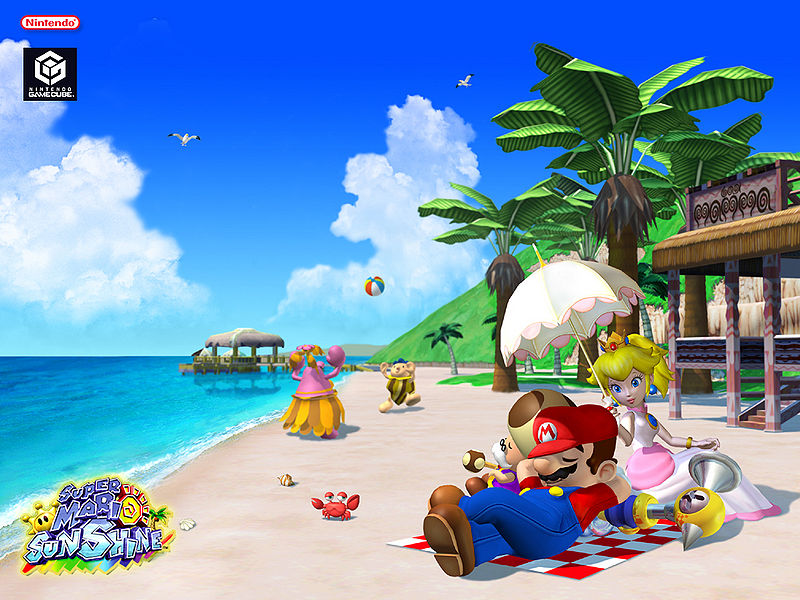