This written piece is on horror in the world of a movie and a videogame. I’ll be explaining the nightmarish content.

The Texas Chainsaw Massacre has group of people who are unexpectedly cut down one by one in solo acts. TCM gives a mechanical experience without any character development reminiscent of older simple story / premise videogames. A slaughterhouse seeping out into society. Jenny left alone has the only option of running. There is strong theme of non-recovery.

Dino Crisis has Regina, who is part of a group, explore an abandoned research facility in order to recover a specific individual. It’s quickly discovered here that man is no longer at the top of the food chain. Along the way she must dodge carnivorous dinosaurs, solve “puzzles”, and manage resources. There is considerable amount of recovery done whether of scavenging items off fallen persons or taking items out of storage. Health items have miraculous recovery powers that heal major damage.

Leatherface appears as towering large object, a stone nullified of affect that then shifts into motion [activation]. He is slightly faster than Sally.

Raptors appear as living things then psychologically are shifted into objects [objectified]. [Sidenote: The key to starting any war is getting people to disassociate and think of enemies as objects.] Artistic element – Raptors have delayed response before running [activation] occurs that allow the player to get a head start. Because of the delay amusing close quarter situations are possible, such as rappelling down into a room to land terrifyingly right next to a velociraptor and immediately rappelling back up, or simply being able to run a small distance before getting chased. This mechanic allows Regina to be guided in super heroic fashion running at and past velociraptors that would simply not be possible, initiated, or pursued in a 1:1 realism scenario. Velociraptors are slightly faster than Regina, so you have to get to a safe place asap.

Leatherface is an executioner. Realistic element – He kills primarily when characters move into his critical distance. Lying in wait he blindsides persons and cannot be juked around. He must be strategically placed and hidden to accomplish this as his large body makes him quite noticeable otherwise. Glimpses of terror revealed by death. Shown only in action. Target is pursued non-stop until defeated. Leatherface will destroy doors and thick brushes in a field with his chainsaw in order to close in on Sally. The dead are quickly removed; they are accounted for.

Raptors move into the player’s critical distance. There they injure, badly damage, or kill. There is a mad scramble to get to the other side of the room or to another door before a raptor gets to you. Because death is not automatic there is struggle and a resulting hostility upon raptor impact. Raptors can be shown inactive (sleeping) and in action. Raptors can be placed anywhere. Under special conditions raptors can open doors, such as when there is another raptor already in the room and you start making noise by shooting at it. Glimpses of terror produced (quickly moving into the next room) by avoiding death or become dead and forgotten by your assailants.

The premise and movements in both games are guided by two different agendas: one being to search and retrieve a scientist, the other being a vacation of sorts at a known house. This means the player pushes into unfamiliar territories guiding Regina while avoiding ruin in order to progress, whereas in TCM the viewer is pushed into unfamiliar territories by lives lost from the group in order to progress. Rewinding save progress is cheating or having multiple lives is exploitative in videogame horror.

Passages of time vs prevalence of night time / darkness. Well-lit indoor areas / passages against dark outside.

1:1 realism makes certain scenarios impossible or mechanically limited option-wise. Player would get stuck at first room / encounter. A relentless enemy or group turns the game into a hide-and-seek simulator or into a shoot-em-up, which completely changes the tone. Defy rules and commonalities. Predictable, uncreative, short-sighted. Ups stress. Eventually the player becomes disillusioned from fear after a few ‘Game Overs’. Furthermore, Leatherface’s appeal of surprise attacks relies on the “unexpected, but only once” of one-sitting movies and does not work on repeated attempts for a game playing medium.

The movie typically ends after 1 hour 30 minutes, which is typical (see: unsurprising) featured length for a film. Captivity. Torment. Power drop.—To me the last few scenes looked indistinguishable from the most depraved real-life Liveleak vids: snuff. Like being subjected to an extended ‘Game Over’ sequence in a videogame. The director ends up shifting from making a movie for the adult members of the general public to that of one for the psychopath killers depicted.

Game can end prematurely at any time. When you die the game / player becomes a movie. Player death screen fades out quickly—Dying with dignity.

Survival horror games are not for everyone. Aside from being intended for mature audiences, their spookiness and haunting imagery require a certain level of mental preparedness, lest there be plenty of screaming and panicking.

In nature, there is a continuous background of nature sounds. Silence is a warning signal, usually indicating the arrival of a predator.

5. Cohesion – Final Destination 3 ~Choose your Fate~ DVD Feature: At certain points in the movie the viewer can select from two decisions using the DVD remote that results in branching paths in the movie. Prohibitively expensive to turn into full-fledged product.

6. Logical/Illogical plot forwarding and Viewer/Player and Protagonist Disconnect – Group splitting up in inherently dangerous situations or shacking up in a house that is clearly haunted. Eternal Darkness, Haunting Ground, Luigi’s Mansion — an order of player-to-avatar scare level. 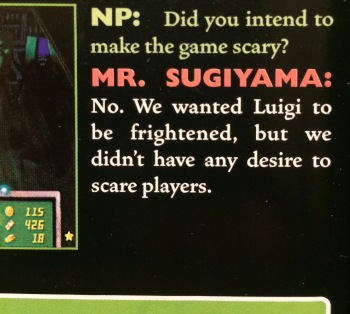